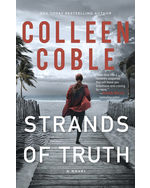 Harper Taylor grew up in foster homes and was used to being alone. Oliver Jackson took Harper under his wing when she was a runaway teenager, and now they work together on marine research. But Harper’s never stopped wishing for a family of her own, and she takes a DNA test that reveals a half-sister living two hours away. Harper and Annabelle have strikingly similar stories: both of their mothers died tragically, without revealing their father’s name. But then Oliver is attacked, and his son, Ridge, and Harper must work together to uncover dangerous secrets that threaten to destroy them all. They must unravel her past before they can have any hope for the future.