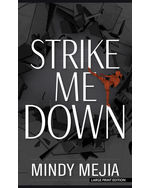 Nora Trier catches thieves. As a forensic accountant and partner in her Minneapolis firm, she’s unearthed millions and prides herself on her independence, until her firm is hired by Strike. A feminist athletic empire, Strike is owned by Logan Russo, a legendary kickboxer, and her marketing genius husband, Gregg Abbott. They’re about to host a major kickboxing tournament with twenty million dollars in prize money. Then it’s discovered that the prize money is missing. Gregg hires Nora’s firm to find both the thief and the money. But Nora’s partner hints that he has information about Strike that could change the course of the investigation in a shocking and deadly way.

“Mejia’s narrative crackles with obsession, greed, lust, and plenty of ambition, and it’s loaded with more twists and turns than a spy novel . . . A compelling and breathless page-turner.”