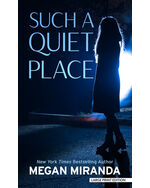 
Such a Quiet Place

Hollow’s Edge used to be a quiet place. An idyllic neighborhood where neighbors looked out for one another. But then came the murder of Brandon and Fiona Truett. A year and a half later, the residents are trapped, unable to sell their homes, and suffocated by their trial testimonies that implicated one of their own. Ruby Fletcher. And now, Ruby’s back. With her conviction overturned, Ruby waltzes right back into the home she once shared with Harper Nash. When Harper begins receiving threatening notes, she realizes not everyone told the truth about the night of the Truett’s murders. She has to uncover the truth before someone else becomes the killer’s next victim.

“This searing small-town thriller . . . explores the complexities of female friendship and the picturesque fictions that money can buy.”