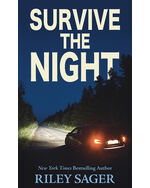 November 1991: Josh Baxter, the man behind the wheel, is a stranger to Charlie. They met at the campus ride board. Both have reasons for wanting to get away. For Charlie, it’s guilt and grief over the murder of her best friend, a victim of the Campus Killer. For Josh, it’s to help care for his sick father. Or so he says. As they travel an empty highway in the dead of night, an increasingly worried Charlie begins to think she’s sharing a car with the Campus Killer. What follows is a game of cat and mouse played out during an age when the only call for help can be made on a pay phone and in a place where there’s nowhere to run.

“Walton pumps up the volume with a fresh angle on systemic racism and freedom of expression. This is a firecracker.”