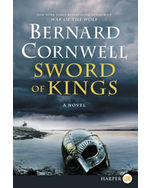 It is a time of political turmoil once more as the fading King Edward begins to lose control over his successors and their supporters. There are two potential heirs — possibly more — and doubt over whether the once separate states of Wessex and Mercia will hold together . Despite attempts at pulling him into the political fray, Uhtred of Bebbanburg cares solely about his beloved Northumbria and its continuing independence from southern control.

But an oath is a strong, almost sacred commitment and such a promise had been exchanged between Uhtred and Aethelstan, his onetime companion in arms and now a potential king. Uhtred was tempted to ignore the demands of the oath and stay in his northern fastness, leaving the quarrelling Anglo-Saxons to sort out their own issues. But an attack on him by a leading supporter of one of the candidates and an unexpected appeal for help from another, drives Uhtred with a small band of warriors south, into the battle for kingship — and England’s fate.