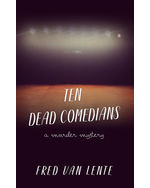 Summoned to the island retreat of legendary Hollywood funnyman Dustin Walker, nine comedians arrive via boat to find the island deserted. Marooned without phone service or wifi, they are soon being murdered one by one. This darkly clever take on genre classics is a marvel of literary ventriloquism, with hilarious comic monologues in the voice of every suspect.

Van Lente's look at the selfishness and misery of show business is sure to be a hit with mystery lovers who savor unusual setups; the side or snark provided by the bitter islanders adds to the atmosphere.