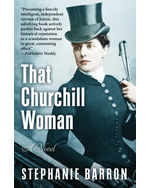 Wealthy, privileged, and fiercely independent New Yorker Jennie Jerome took Victorian England by storm when she landed on its shores. At nineteen, she agrees to marry the son of a duke she has known only three days. As Lady Randolph Churchill, she gave birth to a son who would define the twentieth century. But Jennie — reared in the luxury of Gilded Age Newport and the Paris of the Second Empire — lived an outrageously modern life, filled with controversy, passion, tragedy, and triumph. Breathing new life into her legacy and the glittering world over which she reigned, That Churchill Woman captures the spirit of an unforgettable woman who altered the course of history.