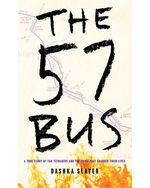 The 57 Bus: A True Story of Two Teenagers and the Crime That Changed Their Lives

One wore a skirt. One had a lighter. One moment changed their lives forever. If not for the 57 bus, they’d never have met. But one reckless act left Sasha, a white teen, severely burned; and Richard, a black teen, facing life in prison.

“The text shifts from straightforward reporting to lyrical meditations, never veering into oversentimentality or simple platitudes. Readers are bound to come away with deep empathy for both Sasha and Richard. VERDICT Slater artfully unfolds a complex and layered tale about two teens whose lives intersect with painful consequences. This work will spark discussions about identity, community, and what it means to achieve justice.”

“Using details gleaned from interviews, social media, surveillance video, public records, and other sources, Slater skillfully conveys the complexities of both young people’s lives and the courage and compassion of their families, friends, and advocates, while exploring the challenges and moral ambiguities of the criminal justice system. This painful story illuminates, cautions, and inspires.”

“With a journalist's eye for overlooked details, Slater does a masterful job debunking the myths of the hate-crime monster and the African-American thug, probing the line between adolescent stupidity and irredeemable depravity. Few readers will traverse this exploration of gender identity, adolescent crime, and penal racism without having a few assumptions challenged. An outstanding book that links the diversity of creed and the impact of impulsive actions to themes of tolerance and forgiveness.”