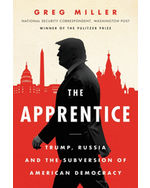 The Apprentice: Trump, Russia and the Subversion of American Democracy

It has been called the political crime of the century: a foreign government, led by a brutal authoritarian leader, secretly interfering with the American presidential election to help elect the candidate of its choice. Now two-time Pulitzer Prize–winning Washington Post national security reporter Greg Miller investigates the truth about the Kremlin’s covert attempt to destroy Hillary Clinton and help Donald Trump win the presidency, Trump’s steadfast allegiance to Vladimir Putin, and Robert Mueller’s ensuing investigation of the president and those close to him.

Deeply reported and masterfully told, The Apprentice is essential reading for anyone trying to understand Vladimir Putin’s secret operation, its catastrophic impact, and the nature of betrayal.