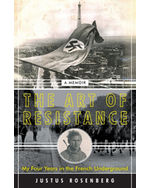 The Art of Resistance: My Four Years in the French Underground: A Memoir

In 1937, as the Nazis gained control and anti-Semitism spread in the Free City of Danzig, a majority German city on the Baltic Sea, sixteen-year-old Justus Rosenberg was sent to Paris to finish his education in safety. Three years later, France fell to the Germans. Alone and in danger, penniless, and cut off from contact with his family in Poland, Justus fled south. A chance meeting led him to Varian Fry, an American journalist in Marseille helping thousands of men and women, including many artists and intellectuals — among them Hannah Arendt, Marc Chagall, Andre Breton, and Max Ernst — escape the Nazis.

With his German background, understanding of French culture, and fluency in several languages, including English, Justus became an invaluable member of Fry’s refugee network as a spy and scout. The spry blond who looked even younger than his age flourished in the underground, handling counterfeit documents, secret passwords, black market currency, surveying escape routes, and dealing with avaricious gangsters. But when Fry was eventually forced to leave France, Gussie, as he was affectionately known, could not get out. For the next four years, Justus relied on his wits and skills to escape captivity, survive several close calls with death, and continue his fight against the Nazis, working with the French Resistance and later, becoming attached with the United States Army. At the war’s end, Justus emigrated to America, and built a new life.