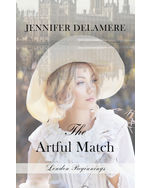 At loose ends in 1881 London after a near tragedy costs her a job, Cara Bernay befriends a carefree artist and begins developing her own talent. Until the artist’s brother — a handsome but arrogant earl — tries to force him back to a “respectable” life. Henry Burke feels the weight of growing financial burdens, and his brother is the one person who can save their family. Henry sees Cara is a positive influence on his brother and on Henry’s young ward, and strikes a deal with her to return with them to their estate. Before long, Cara must choose between following her heart and pursuing a bold plan that could bring disaster.