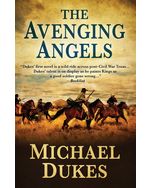 From 1866 to 1878, former Rebel cavalry captain Gabriel Kings has been the bane of railroad barons and bankers from Wyoming to Texas. Now he and the gang of outlaws calling themselves the Avenging Angels of the Shenandoah will face the most serious threat of their infamous careers — a posse headed by two seasoned Texas Rangers and a pair of cagey Pinkerton detectives. Raising the stakes even higher, an old enemy has set his sights on Kings, and the woman Kings loves — spirited rancher’s daughter Belle Jackson — is wearing thin for waiting on him. Can Kings make it through this last scrape in one piece, or has his time finally come?