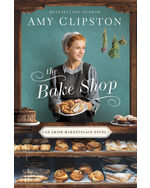 When Christiana Kurtz opens a popular bake shop at the local market, she meets — and eventually becomes friends with — Jeffrey Stoltzfus, who runs the leather and woodcraft store next door. But when Christiana’s father finds out that Jeffrey uses electricity in his work, he criticizes him as being too modern and forbids Christiana from dating him. Later, Jeffrey’s shop catches fire and puts the entire market in jeopardy. Regardless of Jeffrey’s mistakes, Christiana can’t deny her feelings for him. Though the odds are against them, can two young people find a way to rebuild both their businesses and their relationship?