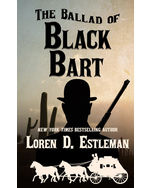 The Ballad of Black Bart

Between July 1875 and November 1883, a single outlaw robbed the stagecoaches of Wells Fargo in California’s Mother Lode country a record of twenty-eight times. Armed with an unloaded shotgun, walking to and from the scenes of the robberies and leaving poems behind, the infamous Black Bart was fiercely hunted. Wells Fargo’s legendary chief of detectives James B. Hume made Bart’s apprehension a matter of personal interest, in a duel of wits involving two adversaries of surpassing cleverness.