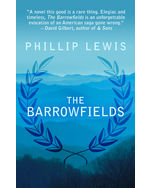 Just before Henry Aster’s birth, his father — outsized literary ambition and pregnant wife in tow — reluctantly returns to his small Appalachian hometown where Henry grows up under his writing desk. Then tragedy tips his father toward a fearsome unraveling and Henry flees, not to return until years later when he, too, must go home again.

“This metaphor of hidden secrets, unrealized dreams and the secrets we keep buried within, is at the heart of Phillip Lewis’ accomplished debut. The father-son dynamic, one of disappointment and regret, is heart-wrenching, artfully illustrated and authentically captured. Full of literary allusions, psychologically astute character studies and wonderfully poetic descriptions of North Carolina’s Appalachia, this story will find wide appeal. A sure-fire pick for book discussion groups.” — Bill's Bookshelf Selector, Bill Kelly