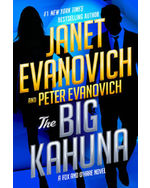 Straight arrow FBI Agent Kate O’Hare always plays by the rules. Charming Con Man Nicholas Fox makes them up as he goes along. She thinks he’s nothing but a scoundrel. He thinks she just needs to lighten up. They’re working together to tackle the out-of-bounds cases ordinary FBI agents can’t touch. And, their relationship? Well, there hasn’t been so much explosive chemistry since Nitro was introduced to Glycerin.

Next on the docket: The mysterious disappearance of the Silicon Valley billionaire, known as the Big Kahuna. Kate’s been assigned to find him but no one seems particularly keen on helping. His twenty-six year old adult actress wife-turned Instagram model wife and his shady Czech business partner are more interested in gaining control of his company. For that they need a dead body not a living Kahuna.

The only lead they have is the Kahuna’s drop-out son, who’s living the dream in Hawaii — if your dream is starting your day with the perfect wave and ending it with a big bowl of weed. To get close to the Kahuna’s son, Kate and Nick go undercover as a married couple in the big wave, bohemian, surfer community of Paia, Maui. Living a laid back, hippy-dippy lifestyle isn’t exactly in Kate’s wheelhouse, but the only thing more horrifying is setting up house with Nick Fox, even if he does look pretty gnarly on a longboard. If they don’t catch a break soon, waves aren’t the only thing she’s going to be shredding (or bedding).