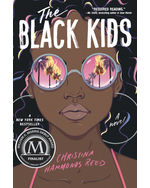 Los Angeles, 1992: It’s the end of senior year and Ashley Bennett and her friends are spending more time at the beach than in the classroom. Everything changes when four LAPD officers are acquitted after beating a Black man named Rodney King half to death. Suddenly, Ashley’s not just one of the girls. She’s one of the Black kids. As violent protests engulf LA and the city burns, Ashley tries to continue on as if life were normal. Even as her sister gets dangerously involved in the riots. Even as her best friends spread a rumor that could derail the future of a classmate. With her world splintering around her, Ashley, along with the rest of LA, is left to question who is the us? And who is the them?

“Incredibly nuanced . . . An excellent addition to all teen collections with a relatable main character who will lead readers through this heated moment in time.”

“A timely exploration of ‘90s Los Angeles during racial upheaval and one girl’s awakening.”