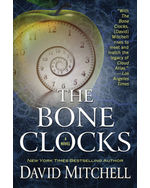 Following a terrible fight with her mother over her boyfriend, fifteen-year-old Holly Sykes slams the door on her family and her old life. No typical teenage runaway, Holly is a lightning rod for psychic phenomena. Now, as she wanders deeper into the English countryside, visions and coincidences reorder her reality. For Holly has caught the attention of a cabal of dangerous mystics — and their enemies. But her lost weekend is merely the prelude.

"This novel will be one of the most talked-about books of the year."