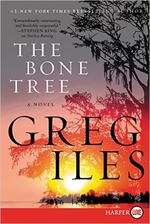 Former prosecutor Penn Cage and his fiancée, reporter and publisher Caitlin Masters, have barely escaped with their lives after being attacked by wealthy businessman Brody Royal and his Double Eagles, a KKK sect with ties to some of Mississippi’s most powerful men. But the real danger has only begun as FBI Special Agent John Kaiser warns Penn that Brody wasn’t the true leader of the Double Eagles. The puppeteer who actually controls the terrorist group is a man far more fearsome: the chief of the state police’s Criminal Investigations Bureau, Forrest Knox. The only way Penn can save his father, Dr. Tom Cage — who is fleeing a murder charge as well as corrupt cops bent on killing him — is either to make a devil’s bargain with Knox or destroy him.

“Absolutely compelling . . . A beautifully constructed story, some extremely fine writing, and some hard-to-bear tragedy. . . . Everything is big about this one: its epic scale [and] its built-in readership based on the success of its predecessor.”

“Bestselling author Iles superbly blends past and present in his swift and riveting story line.”

“Richly plotted . . . [and] the action-packed narrative moves swiftly to a surprising and moving conclusion.”