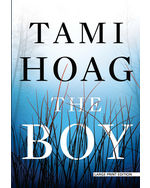 When Detective Nick Fourcade enters the home of Genevieve Gauthier outside the sleepy town of Bayou Breaux, Louisiana, the bloody crime scene that awaits him is both the most brutal and the most confusing he's ever seen. Genevieve's seven-year-old son, KJ, has been murdered by an alleged intruder, yet there is no evidence of forced entry, not a clue that points to a motive. When KJ's sometimes babysitter, twelve-year-old Nora Florette, is reported missing the next day, the town is up in arms, fearing a maniac is preying on their children. With pressure mounting from a tough, no-nonsense new sheriff, the media, and the parents of Bayou Breaux, Nick and Annie dig deep into the dual mysteries.