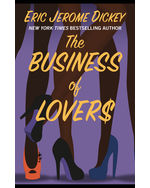 The Business of Lovers

Unlike their younger brother, André, whose star as a comedian is rising, neither Dwayne nor Brick Duquesne is having luck with his career or love life. But while Dwayne is reconnecting with his teenage son, he finds himself torn between animosity and attraction with his son’s mother, Frenchie. And Brick’s latest job a chauffeur and bodyguard to three women temporarily working as escorts opens a world of possibility in both love and money. Penny, Christiana, and Mocha Latte know plenty of female johns who would pay for a few hours with a man like Brick if he can let go of his past, embrace his unconventional new family, and allow strangers to become lovers.