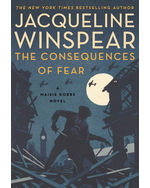 
The Consequences of Fear

While on a delivery, young Freddie Hackett, a message runner for a government office, witnesses an argument that ends in murder. Dismissed by the police when he attempts to report the crime, Freddie goes in search of a woman he once met when delivering a message: Maisie Dobbs. While Maisie believes the boy and wants to help, she must maintain extreme caution: she’s working secretly for the Special Operations Executive, assessing candidates for crucial work with the French resistance. As Maisie becomes entangled in a power struggle between Britain’s intelligence efforts in France and the work of Free French agents operating across Europe, she must also contend with a killer found where she least expects. Soon she realizes she’s been pulled into the orbit of a man who has his own reasons to kill — reasons that go back to the last war.

“Outstanding. . . . Maisie and her loving family of supporting characters continue to evolve and grow in ways sure to win readers’ hearts. Winspear is writing at the top of her game.”

“Fast-paced . . . Winspear never sugarcoats the horrors of war, and alongside the camaraderie shown by these characters and the Londoners surrounding them deliver terrible truths that must be endured. . . . also recommend it as a less-weighty read-alike for Anthony Doerr’s ALL THE LIGHT WE CANNOT SEE.”