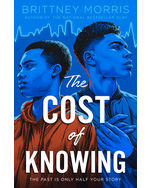 
The Cost of Knowing

Sixteen-year-old Alex Rufus is trying his best. He tries to be the best boyfriend he can be to his girlfriend, Talia, and the best protector he can be over his little brother, Isaiah. But as much as Alex tries, he often comes up short. It’s hard to for him to be present when every time he touches an object or person, Alex sees into its future. When he touches Talia, he sees them at the precipice of breaking up. And when Alex touches a photo that gives him a vision of his brother’s imminent death, everything changes. With Alex now in a race against time, he and Isaiah must grapple with their past and their future.

“Like a Mary Roach but with a solid scientific background to her credit, Horowitz is a skilled investigative reporter who takes readers into unfamiliar worlds, shares her experiences there, asks probing questions, and makes those worlds come alive. Dog owners curious about the lives of their pets will savor this book, but it deserves a wider audience than just animal lovers.”