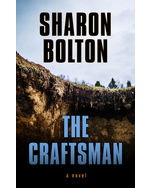 Florence Lovelady’s career was made when she convicted coffin-maker Larry Grassbrook of a series of child murders 30 years ago in a small village in Lancashire. Like something out of a nightmare, the victims were buried alive. Florence was able to solve the mystery and get a confession out of Larry before more children were murdered, and he spent the rest of his life in prison. But now, decades later, he’s dead, and events from the past start to repeat themselves. Is someone copying the original murders? Or did she get it wrong all those years ago? When her own son goes missing under similar circumstances, the case not only gets reopened . . . it gets personal.