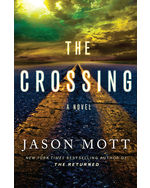 Orphaned at the age of five, twins Virginia and Tommy Matthews survived a merciless foster care system by relying on each other. Twelve years later, the world begins to collapse around them as a deadly contagion steadily wipes out entire populations and a devastating world war rages on. When Tommy is drafted for the war, the twins are faced with a choice: accept their fate of almost certain death, or dodge the draft. Virginia and Tommy flee into the dark night.