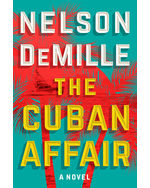 Daniel Graham MacCormick — Mac for short — seems to have a pretty good life. At age thirty-five he’s living in Key West, served five years in the Army as an infantry officer with two tours in Afghanistan. He returned with the Silver Star, two Purple Hearts, scars that don’t tan, and a boat with a big bank loan.

Carlos, a hotshot Miami lawyer heavily involved with anti-Castro groups wants to hire Mac’s charter fishing boat for a ten-day fishing tournament to Cuba at the standard rate, but Mac suspects there is more to it and turns it down. The price then goes up to two million dollars, and Mac agrees to hear the deal, and meet Carlos’s clients — a beautiful Cuban-American woman named Sara Ortega, and a mysterious older Cuban exile, Eduardo Valazquez.

What Mac learns is that there is sixty million American dollars hidden in Cuba by Sara’s grandfather when he fled Castro’s revolution. With the “Cuban Thaw” underway between Havana and Washington, Carlos, Eduardo, and Sara know it’s only a matter of time before someone finds the stash — by accident or on purpose. And Mac knows if he accepts this job, he’ll walk away rich . . . or not at all.

“[An] action-packed, relentlessly paced thriller . . . A line from the novel perfectly describes this page-turner: ‘Sex, money, and adventure. Does it get any better than that?’”

“DeMille's latest is a timely stay-up-all-night, nail-biting page-turner featuring his iconic tongue-in-cheek, articulate, rhythmic narrative. His affably irreverent protagonist, fantastic believable supporting characters, and tense, realistic Cuba-set scenes including some jaw-dropping revelations make this a must-read for his many fans.”

“This is powerful, mythic stuff, like Confederate gold and Nazi treasure . . . As the true nature of the charter-boat owner’s job becomes clear and the betrayals begin, DeMille mounts a long, magnificent sequence with boat chases, helicopter rescues, and tracer fire. They’re all described in that visceral style the author has mastered.”