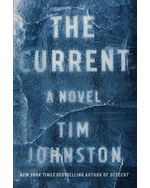 When state troopers pull two young women and their car from an icy Minnesota river, one has drowned, while the other is half frozen but alive. What happened was no accident, and news of the crime awakens the community’s memories of another young woman who lost her life in the same river ten years earlier, and whose killer may still live among them. The surviving young woman soon realizes that she’s connected to the earlier unsolved case. As she investigates, she comes close to dangerous truths and the violence that simmers just below the surface of her hometown — where a young woman can come home, but still not be safe.