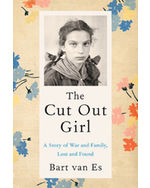 The Cut Out Girl: The Story of War and Family, Lost and Found

Bart van Es left Holland for England many years ago, but one story from his Dutch childhood never left him. It was a mystery of sorts: a young Jewish girl named Lientje had been taken in during the war by relatives and hidden from the Nazis, handed over by her parents, who understood the danger they were in all too well. The girl had been raised by her foster family as one of their own, but then, well after the war, there was a falling out, and they were no longer in touch. What was the girl's side of the story, Bart wondered? What really happened during the war, and after?