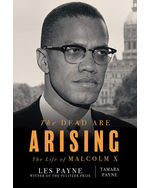 
The Dead Are Arising: The Life of Malcolm X

Les Payne, the Pulitzer Prize–winning investigative journalist, embarked in 1990 on a nearly thirty-year-long quest to interview anyone he could find who had actually known Malcolm X. His goal was ambitious: an unprecedented portrait of Malcolm X, one that would separate fact from fiction. The result is this historic biography that conjures a never-before-seen world of its protagonist, setting Malcolm’s life not only within the Nation of Islam but against the larger backdrop of American history, the book traces the life of one of the twentieth century’s most politically relevant figures “from street criminal to devoted moralist and revolutionary.”

“Monumental . . . Payne’s richly detailed account is based on hundreds of interviews with Malcolm X’s family members, childhood friends, cellmates, allies, and enemies, and meticulously tracks his journey from Omaha . . . to his emergence as the Nation of Islam’s ‘most gifted and successful proselytizer and demander of justice,’ and his assassination in 1965. Along the way, Payne folds in incisive portraits of [major] figures . . . An extraordinary and essential portrait of the man behind the icon.”