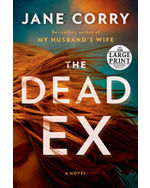 Vicki works as an aromatherapist, healing her clients out of her home studio with her special blends of essential oils. She’s just finishing a session when the police arrive on her doorstep — her ex-husband David has gone missing. Vicki insists she last saw him years ago when they divorced, but the police clearly don’t believe her. And her memory’s hardly reliable — what if she did have something to do with it?

Meanwhile, Scarlet and her mother Zelda are down on their luck, and at eight years old, Scarlet’s not old enough to know that the “game” her mother forces her to play is really just a twisted name for dealing drugs. Soon, Zelda is caught, and Scarlet is forced into years of foster care — an experience that will shape the rest of her life.

David’s new wife, Tanya, is the one who reported him missing, but what really happened on the night of David’s disappearance? And how can Vicki prove her innocence, when she’s not even sure of it herself? The answer lies in the connection among these four women — and the one person they can’t escape.

“Corry’s skill at building suspense and creating characters with secrets pasts, as shown in her earlier novels, is on display again here.”

“Corry delivers strong plot twists, a fast pace, and devious characters, making this a perfect blend of Liv Constantine’s THE LAST MRS. PARRISH and Alafair Burke’s THE WIFE that will keep readers guessing until the end.”

“Gripping. . . Corry delivers several satisfying plot twists as well as a meditation on the nature of family.”