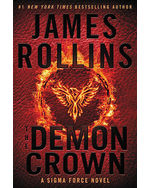 Off the coast of Brazil, a team of scientists discovers a horror like no other, an island where all life has been eradicated, consumed, and possessed by a species beyond imagination.

An ancient horror — dormant in the marrow of preserved bones — is free once more, nursed and developed into a weapon of incalculable strength and malignancy, ready to wreak havoc on an unsuspecting world.

To stop its spread, Commander Grayson Pierce of Sigma Force must survive a direct attack on the island of Maui. To be there first has always been the core mission of Sigma Force, a covert team forged to be America’s front line against emerging threats. But this time, even Sigma may not be able to decipher the deadly mystery, one that traces back to the founding of the Smithsonian Institution.