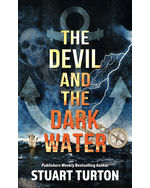 
The Devil and the Dark Water

An Award-Winning Author
An Amazon Best Book of the Year

It’s 1634 and Samuel Pipps, the world’s greatest detective, is being transported to Amsterdam to be executed for a crime he may, or may not, have committed. Travelling with him is his loyal bodyguard, Arent Hayes. No sooner are they out to sea than devilry begins to blight the voyage. A twice-dead leper stalks the decks. Strange symbols appear on the sails. Anyone could be to blame. Even a demon. And then three passengers are marked for death, including Samuel. With Pipps imprisoned, only Arent can solve a mystery that connects every passenger. A mystery that stretches back into their past and now threatens to sink the ship, killing all on board.

“[An] outstanding whodunit . . . Fans of impossible crime fiction won’t want to miss this one.”

“A devilish sea saga that never runs out of cutthroat conspiracies.”

“An enjoyable throwback to the exaggeratedly intellectual plotting of Golden Age crime fiction.”