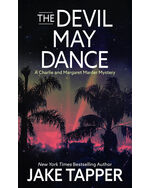 
The Devil May Dance

Charlie and Margaret Marder know all too well how the tangled web of power in the nation's capital can operate, and Attorney General Robert Kennedy needs them to look into a potential threat to the security of the United States. They quickly find themselves on a flight to Los Angeles. At the center of their investigation is Frank Sinatra, a rumored mob crony. Before they know it, Charlie and Margaret are being pursued by sinister forces, facing off against the darkest and most secret side of Hollywood’s power. Someone knows what they’ve uncovered and can’t let them leave alive.