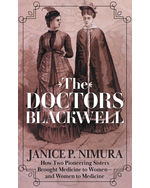 
The Doctors Blackwell: How Two Pioneering Sisters Brought Medicine to Women and Women to Medicine

Elizabeth Blackwell believed from an early age that she was destined for a mission beyond the scope of “ordinary” womanhood. In 1849, she became the first woman in America to receive an M.D. Her intelligence and intensity ultimately won her the acceptance of the male medical establishment. She was soon joined in her iconic achievement by her younger sister, Emily. Exploring the sisters’ allies, enemies, and enduring partnership, this richly researched new biography celebrates two complicated pioneers who exploded the limits of possibility for women in medicine.