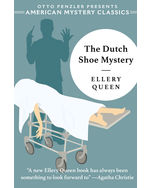 The son of a police detective, Ellery Queen lends his deductive powers to the New York City homicide squad and has seen more than his fair share of mangled corpses. Though he is accustomed to gore, the thought of seeing a living person sliced open makes him ill. So when a doctor invites him to sit in on an operation, Queen braces his stomach. As it happens, his stomach is spared, but his brain must go to work. The patient is Abigail Doorn, a millionairess in a coma. But just before the first incision, the doctors realize she is dead, strangled while lying unconscious on her gurney. Queen came to the hospital to watch surgeons work, but now it’s his time to operate.

“Perfect for a discussion group exploring the history and variety of the mystery genre.”

“The solution [is] one of Ellery’s brainiest”