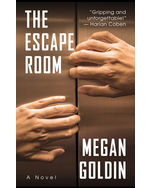 In the world of finance, Vincent, Jules, Sylvie, and Sam are at the top of their game. Invited to participate in an escape room challenge, the ferociously competitive co-workers crowd into the elevator of a high-rise building, eager to prove themselves. But when the lights go off and the doors stay shut, they’re caught in a dangerous game of survival. Trapped in the dark, the colleagues must put aside their bitter rivalries and work together to solve cryptic clues to break free. But as the game reveals the team’s darkest secrets, tempers fray, and the clues turn deadly. They must solve one final chilling puzzle: which one of them will kill in order to survive?