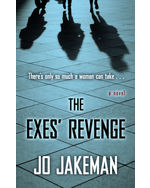 Divorces are often messy, and Imogen’s is no exception. Phillip Rochester is controlling, abusive, and determined to make things difficult. When he shows up without warning demanding that Imogen move out of their house by the end of the month or he’ll sue for sole custody of their young son, she’s ready to snap. In a moment of madness, Imogen does something unthinkable — something that puts her in control for the first time in years. But she wasn’t expecting both Phillip’s ex-wife and new girlfriend to get tangled up in her plans. The three very different women — unlikely allies — reluctantly team up to take revenge on a man who has wronged them all.