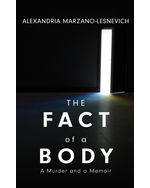 The Fact of a Body: A Murder and a Memoir

The child of two lawyers, Alexandria Marzano-Lesnevich was staunchly anti-death penalty. But wile reviewing old tapes of a convicted murderer speaking of his crimes, she's overcome with the feeling of wanting him to die. Shocked, she digs deeper into the case. And despite their vastly different circumstances, something in his story is unsettlingly, uncannily familiar.

Surprising, suspenseful, and moving…A book that defies both its genres, turning into something wholly different and memorable.