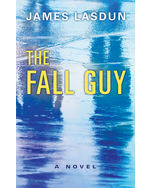 An Indie Next Pick
A BOMC Selection

It is summer, 2012. Charlie, a wealthy banker with an uneasy conscience, invites his troubled cousin Matthew to visit him and his wife in their idyllic mountaintop house. As the days grow hotter, the friendship between the three begins to reveal its fault lines, and with the arrival of a fourth character, the household finds itself suddenly in the grip of uncontrollable passions. As readers of James Lasdun’s acclaimed fiction can expect, The Fall Guy is a complex moral tale as well as a gripping suspense story, probing questions of guilt and betrayal with ruthless incisiveness.

“A taut and cerebral literary thriller. . . . Matthew delights the couple with his culinary talents but tension soon boils over in this exquisitely paced, unbearably suspenseful morality tale. Lasdun’s elegant prose serves up an unsettling dish of obsessions and jealousy seasoned with keen social observations of class and privilege while simmering with plots of revenge. For fans of Ian McEwan and Herman Koch.” — Bill's Bookshelf Selector, Bill Kelly

“[A] terrific novel of suspense . . . Lasdun presents the inexorable turnings of fate in a subtle and disconcerting way.”

“Lasdun's controlled, devious storytelling style infuses every tick of the clock with tension.”