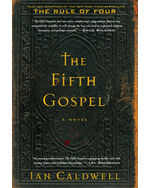 In 2004‚ a mysterious exhibit is under construction at the Vatican Museums when its curator is murdered. The same night‚ there’s a violent break-in at the Vatican home of his research partner‚ Father Alex Andreou. Desperate to keep his family safe‚ Father Alex investigates. But first he must reconstruct the dead curator’s secret: what the four Christian gospels — and a little-known fifth — reveal about the Church’s most controversial holy relic.