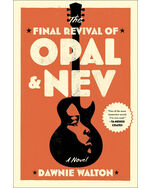 
The Final Revival of Opal and Nev

Opal is a fiercely independent young Black woman. When the aspiring British singer/songwriter Neville Charles discovers her at a bar’s amateur night, she takes him up on his offer to make rock music together. In early seventies New York City, just as she’s finding her niche, a rival band brandishes a Confederate flag at a concert. Opal’s bold protest sets off a chain of events with deadly repercussions. Decades later, music journalist S. Sunny Shelton seizes the chance to curate an oral history about her idols. But as her interviews dig deeper, a nasty new allegation from an unexpected source threatens to blow up everything.

“Walton pumps up the volume with a fresh angle on systemic racism and freedom of expression. This is a firecracker.”