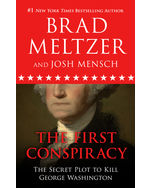 The First Conspiracy: The Secret Plot to Kill George Washington

In 1776, an elite group of soldiers were handpicked to serve as George Washington’s bodyguards. But some of them had a treasonous plan. Just prior to the Revolutionary War, they conspired with New York Governor William Tryon and Mayor David Mathews against George Washington. This is the story of the deadly plot and how it was revealed. It is tale of leaders, liars, counterfeiters, and jailhouse confessors — and it shows how close America was to losing the Revolutionary War.