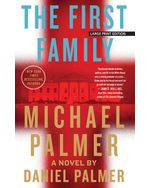 Growing up in the White House was never supposed to be easy. So when sixteen-year-old Cam, also a champion chess player, experiences extreme moodiness and an uncharacteristic violent outburst, doctors are quick to dismiss his troubles as adolescent angst. Still, Secret Service agent Karen Ray, whose job is to guard the president’s family with her life, is convinced that Cam’s condition is serious — enough so that she summons her physician ex-husband for a second opinion.

At first, the president’s team doesn’t want to listen to Dr. Lee Blackwood. But when Cam gets sicker, Lee must make a diagnosis from a puzzling array of symptoms. His only clue is a young patient named Susie, a young musical prodigy who seems to be suffering from similar symptoms as Cam. Hospitalized after an attempt on her life by a determined killer, Susie faces increased jeopardy as Cam’s case takes on a terrifying new dimension. Is someone trying to send a message — and kill the president’s son? As Lee and Karen race for a cure to help Cam, they begin to uncover betrayals that breach the highest levels of national security. And until they can find the truth, no one is safe. . .