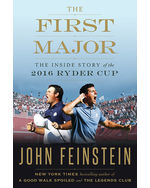 The First Major: The Inside Story of the 2016 Ryder Cup

Coming into 2016, the Americans had lost an astounding six out of the last seven Ryder Cup matches, and tensions were running high for the showdown that took place in October, 2016 in Hazeltine, Minnesota, just days after American legend Arnold Palmer had died. What resulted was one of the most raucous and heated three days in the Cup's long history.