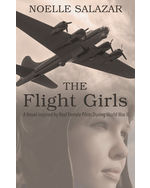 1941. Audrey Coltrane has always wanted to fly. It’s why she implored her father to teach her at the little airfield back home in Texas. It’s why she signed up to train military pilots in Hawaii when the war in Europe began. And it’s why she insists she is not interested in any dream-derailing romantic involvements, even with the disarming Lieutenant James Hart. Then one fateful day, she gets caught in the air over Pearl Harbor just as the bombs begin to fall, and suddenly, nowhere feels safe. Shining a light on a little-known piece of history, The Flight Girls is a sweeping portrayal of women’s fearlessness in the face of adversity, and the power of friendship.