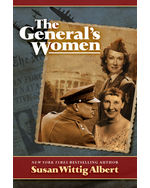 Set during and after the chaotic years of World War II, The General’s Women tells the compelling story of the conflicted relationship between General Dwight Eisenhower and Kay Summersby, his Irish driver/aide — and the impact of that relationship on Mamie Eisenhower and her life in Washington during the war.