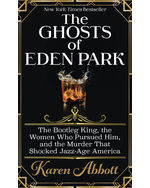 The Ghosts of Eden Park: The Bootleg King, the Women Who Pursued Him, and the Murder That Shocked Jazz-Age America

In the early days of Prohibition, long before Al Capone became a household name, a German immigrant named George Remus quits practicing law and starts trafficking whiskey. Within two years he's a multi-millionaire. The press calls him "King of the Bootleggers." By the summer of 1921, Remus owns 35 percent of all the liquor in the United States. Pioneering prosecutor Mabel Walker Willebrandt is determined to bring him down, resulting in a bitter feud that soon reaches the highest levels of government — and that can only end in murder.