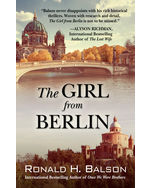 The Girl From Berlin

An old friend calls Catherine Lockhart and Liam Taggart to his famous Italian restaurant to enlist their help. His aunt is being evicted from her home in the Tuscan hills by a corporation claiming they own the deeds, even though she can produce her own. Their only clue is a manuscript handwritten in German. Born in Berlin in 1918, Ada Baumgarten was the daughter of the Berlin Philharmonic’s first-chair violinist, and herself a violin prodigy. As growing unrest threatened her Jewish family, Ada’s extraordinary talent made her a target even as it saved her, allowing her to move to Bologna ― though further heartache awaited. But what became of Ada?