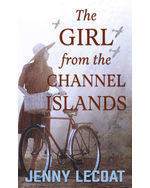 
The Girl from the Channel Islands

Summer 1940: Hedy Bercu watches the skies over Jersey for German planes, convinced that an invasion is imminent. When it finally comes, there is no counterattack from Allied forces. Most islanders and occupying forces settle into an uneasy coexistence, but for Hedy, the situation is perilously different. For Hedy is Jewish. With no means of escape, Hedy works as a translator for the Germans while silently working against them and forges a tentative friendship with a sympathetic German officer. Soon, her survival will depend not just on her own courage, but on the community she has come to cherish and a man who should be her enemy.

“Lecoat capably combines historical fact with the fictional narrative, and offers a cast rich with multidimensional characters. Readers will be riveted.”

“Lecoat’s debut is based on true events, which will make readers even more curious about the backstory and motivations of Hedy, Kurt, and the somewhat enigmatic Dorothea. The unique Channel Island setting may intrigue readers of WWII-set women’s fiction.”