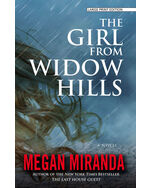 When Arden Maynor was a child, she was swept away while sleepwalking during a rainstorm. Against all odds, she was found days later, alive. The miraculous girl from Widow Hills inspired fans — but also creeps and stalkers. As soon as she was old enough, Arden changed her name to Olivia and moved far away. But as the twentieth anniversary of Arden’s rescue approaches, interest in her renews. Soon Olivia feels like she’s being watched and begins sleepwalking again. One night she jolts awake in her yard and discovers the corpse of a man she knows — from her previous life. And now the girl from Widow Hills is about to become the center of the story, once again.

“Miranda, a best-selling author of thrillers for both adults and YAs, sprinkles the present-day narrative with transcripts and reports from Olivia’s past, building suspense with startling plot twists that lead to a stunning climax. Another compulsive page-turner from an accomplished author."

“This is a great whodunit, done well. Olivia/Arden narrates but Miranda (The Last House Guest) creatively uses media transcripts, newspaper reports, book excerpts, and voicemails to piece together her fragmented story that ends with a chilling twist.”

“Miranda flaunt[s] her considerable talent for jaw-dropping, yet believable, twists. Even jaded readers might not see this one coming. An unusual heroine anchors this creepy, fast-paced chiller. This is Miranda’s best book yet.”